I am sorry that I haven´t been writing more since I got back from London. I have been busy finishing some bears and I had an order for my bags to do after my trip.
But I am getting there and I feel that I need to take things a bit slowly now. It was a mad time before Hugglets so I need a break. So forgive me if I am a bit quiet, I do hope that you understand.
But I will be back soon with lots of new energy, promise.

Phhuuu, I have now put all the new bears on my website. I hope you like them....
There are 10 new ones so if you get the time please have a look.

I just want to let you know that there will be a update of my teddybears in a day or two. I will put a lot of new bears on my website....
So stay tuned!

I had an amazing time in London!!!!!The weather on the Saturday was so warm and wonderful. I arrived in London at noon and after being at the hotel we (me and my mum) went out to see the shops and Picadilly Circus. We got a glimt of the Palace of Westminster too. We were pretty tired in the evening so it was an "early" night that day.

In the morning of the BIG day I was starting to get a bit nervous and I usually don´t get like that...But the day went so well and I spoke to a lot of artist and collectors. It is really my favorite day of the year!!!!
I had a bit of unluck as the lamp that I was going to put on the table got broken on the flight to England. I got a bit worried that it would look a bit too "dark" but there wasn´t much I could do about it...:0(

A lot of my bears found new homes and some bears went to Abracadabra bears of England and some to a shop in Japan. It was so nice to see everybody and I did my best to go around and see the most of you. But at the same time you don´t want to be gone from your table too long...
So if I didn´t see you or missed you at the show, sorry.

I want to say a big thank you to everybody that adopted a bear or two and thank you for all the nice comments. It really makes me so happy to hear it and I appreciate it so much!
More good new is that I have been contacted by a magazine from Holland that wants to do an articel about me and my bears. Happy dance here....

I will post more about it later.
Have a nice day and once again thank everybody!

PPhhuuu, I manged to do everything I needed to do and everything is packed. I hope that I haven´t forgot anything though. It is going to an early morning tomorrow as the plan goes from Copenhagen, Denmark.

I won´t be back until late evening on Monday so I can´t answere any emails until Tuesday. But I will tell you all about Hugglets then...
I want to say a big "thank you" to everybody that has left comments on my blog and sent me emails.

There are so many things to do so I feel that I have to stay up late tonight. There has been a lot happing this week, like work, and then there has been parent meeting at school etc. So it hasn´t just been teddy bear things.
Well, enough for now, I have to get back to finishing everything. You will know tomorrow if I did everything in time or not....;0)

The online show " who is who in bearmaking" is coming to an end soon and I would like to say a Thank you to all that have send me an email and adopted a BearMeToo bear!!!
I had lots of fun and it wasn´t toooo hard to get out of the bed this morning at 5Am....:0)
Well, I have to finish everything off for the show in London next Sunday. It is going to be so exciting to go over to London.
Again thank you!

Come and join us!

I just want to remind everybody about the online show that starts tomorrow! It is going to be so much fun, I love to do shows... and I hope that you will like the bears when you get to see them.....

I will be at the computer during the 6 hours both days as long as the shows goes on. So if you got any questions or maybe you just want to chatt, I will love to hear from you!
You can go in HERE to check when the shows starts at your time and any other information.
I hope to see you "there".

The last bear for Hugglets 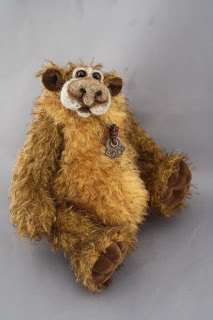 This is the last bear that I have done for the Hugglets Show. I am so pleased with the way he came out, he is absolute one of my favorites. The photo came out well too as I took the photo yesterday when the sun was out.

Today it is cloudy and the rain is coming down, this means that the summer is over for this year and autumn is here.
You can really see the changes in the trees and feel that the air is different. The days are starting to become shorter as well and it is darker longer in the mornings...
I always feel a bit sad thinking that the summer is over, don´t know why, maybe because winter is so long here. And I am not that keen of the winter! Well that is just the way things are but do you feel the same when the weather changes?

Enough about that and positive thinking!!!!!I have decided that this bear is going to be one out of two. I have never done a bear before that is two the same but I am so happy with this chap that I will do it with him.
I am glad that all the bears are done so I can start to concentrat on my bags now.
So many thing to do before Hugglets but I hope that I will have one or two days to relax before I get on the plan.... 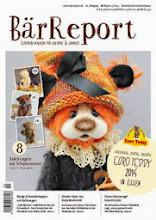 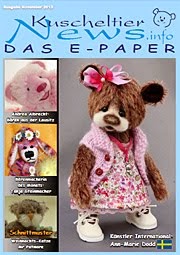 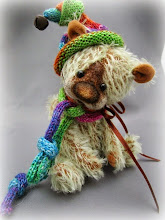 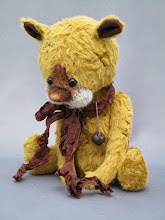